Riding in a Classic Long Format Event Part 1: The road to the Novice 3 Day at Waredacca

In the original sport of eventing, competition took place over three days: Dressage Day, Endurance Day and Show Jumping Day. This is the outline of the current format with the major change being that Endurance day, which used to include 4 phases, has been reduced to just one phase, the XC test.

In a 3 Day, Endurance Day includes Phases A, B, C and D.  Phase A is "roads and tracks" during which horse and rider set out to cover a set distance within a set time, crossing through "gates" as they go. The terrain varies and the ground is generally covered at a trot with a bit of walk and some canter to get ready for Phase B.

Phase B is the "steeple chase" and the speeds vary depending at which level you compete. Generally, steeple chase is a more flat out gallup than the cross country test. It is short but includes the jumping of brush fences which means they are a bit higher than most fences at the level because if a horse hits the top they will just brush through it. Higher levels gallop faster than lower levels and jump more fences.

Phase C is a second, longer section of "roads and tracks" and is a period for the horse to recover a bit from the exertion of steeple chase.

After phase C, riders come into the "ten minute box" where the horse's vital signs are taken immediately upon arrival. A "pit crew" (to borrow a phrase from another sport) jumps into action, sponging the horse and walking it to cool it down while the rider sits, drinks and thinks about the final phase of the day. The veterinarian watches the horse jog to make sure it's sound, checks the vitals to make sure it has recovered sufficiently and if all looks good, sends the horse and rider out on Cross Country.

Phase D is pretty much like the XC test we see out at events in the current version of the sport but the course for a 3 Day will be a championship level course which means it will be long and the jumps will be maxed out in height and spread and there will be challenging questions for the level. After D, horse and rider return to the vet box until they are cleared to head to the barn. Again, we sponge and walk the horse to cool it down and jog to make sure it's sound.

Back to the road to the 3 Day…it began last winter. We bought an old copy of the USCTA Book of Eventing and started reading, taking notes on the equipment lists, conditioning plans and other nuggets of wisdom within this awesome book.

Being in Pony Club was an advantage. Over the winter Elizabeth attended HB Preps held by our region. The HB is an upper level horsemanship certification in Pony Club which has a pretty high bar of knowledge about the care and health of horses. She learned a great deal about nutrition, conditioning and soundness which would inform her choices over the 6 months leading up to the 3 Day. Elizabeth achieved her Pony Club C2 in August and one of the requirements was to write a conditioning schedule focused on a particular event. She chose the 3 Day and followed through on the elaborate plan she had laid out.

Another bonus working in her favor is her amazing trainer who loves the 3 Day format and supported Elizabeth's goal. Everything we did all season was leading up to this event. We determined her competition schedule based on getting to her goal. She did fewer camps so that she could focus on the horse's fitness, soundness and comfort, knowing that at the end of the season she would be asking a great deal of her lovely mare.

So we spent the summer working toward the 3 Day. By September it was time to really start focusing on getting ready. We made our own equipment list (you need quite a bit of equipment in the 10 minute box). We took Quizz to a couple of different places nearby with huge hills for hill workouts.  Her schedule began to resemble that of any athlete in training - some interval days, some hill days, some days focused on weight lifting (Dressage), some days focused on jumping. A week prior to the event, Elizabeth and Quizz did one last XC school, jumping Training level to prepare for what would be a much more difficult Novice course than they had yet to ride over. 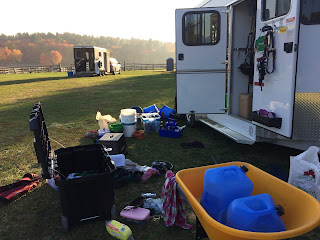 Then it was time to pack. We bought two big, plastic bins for all the extra equipment we would need in the 10 minute box as well as tarps and more big buckets and sponges. We packed LOTS of towels and rain gear. And because we anticipated a 10 hour drive, we packed excessive quantities of hay, extra jugs of water and a full bag of hay cubes. It took days to get organized and fully packed. 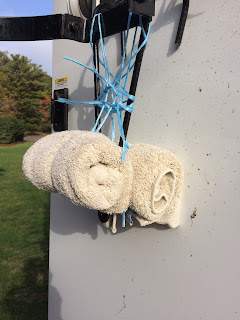 We even borrowed a bucket holder and zip tied it to the trailer door so Quizz could drink on the long ride to Maryland. I was especially pleased with myself after securing the bucket holder with hand towels and baling twine. In a barn setting, there isn't much you can't fix with baling twine, duct tape and a sharpie at your disposal!

So that was it! We were as ready as we would ever be. And though we had worked hard and done everything we could to prepare, we were trepidatious, setting out on this adventure to attempt something big, something totally new to us.

We decided to hit the road at 2am. We're crazy but I had heard the drive was 10 hours and I was so worried about 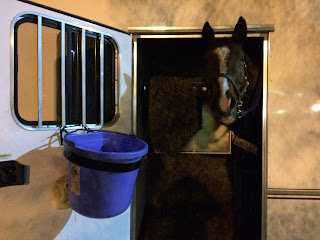 getting stuck in commute traffic. There is no way to get around it. The best way to get from Boston to Maryland (the Baltimore area) is straight through NYC, over the George Washington Bridge. So we set out at 2am.

The road belonged to us and the enormous trucks. We hit absolutely no traffic anywhere and arrived WAY too early. The drive takes 8 hours for future reference. The 10 hour drive is what you get during normal, human hours. We listened to a book on CD and enjoyed the drive that would take us to our biggest adventure yet. Even Quizz seemed up for adventure. She is an excellent traveler and couldn't wait to see where we were taking her!