Canadian Adventure: As you're planning your schedule for 2017, consider doing an event in Canada!

When planning our eventing calendar for 2016 we decided to get a little creative. We needed another event in early July and Area I didn't have exactly what we wanted. We saw a listing for Napierville Horse Trials and decided to become international eventers!

Napierville is just over the boarder in Quebec. The first order of business was to acquire health certificates, hotel reservations and plan our route for getting there.

Finding information about the horse trials was not easy. Eventing Canada's website was very confusing and the omnibus was not thorough. Much of the information out there was in French which added an exciting layer of challenge. The venue is called La Criniere. We found the event on the USEA Area I page. It was listed with the schooling shows and has a website, email and phone number listed. The website is not great and much of it is in French so email worked best.

We booked a motel very close to the venue. No one there spoke any English and we had to book the old fashioned way - by phone. I ended up having a French friend call back to make sure we had actually booked three rooms and that dogs were allowed. With that all set, it was time to travel!

We decided to take 87 north through Vermont. The drive was beautiful on great, new pavement and with no traffic. The border crossing was interesting. There was a line of traffic at the border and an option to go off to the right where trucks and livestock were sent. Apparently we could go either way and had we known, we likely would have pulled off to the right. Instead, we waited. Our crossing was totally uneventful and the agents just asked what we were up to and how long we planned to stay and waved us through.

Our friends traveling in another rig had a more difficult time. They were sent over to the livestock area and questioned a bit more. They were also chastised for not providing extra copies of their health certificate and coggins. So one piece of advice, in addition to bringing your passports, bring copies of all your documentation, just in case.

We got lost after crossing the border. The road signs were a bit strange and our directions weren't great. We did eventually find our way to the venue, just in time to unload in a down pour!

Stabling was in the indoor and the temporary stalls were wooden. They did not have gates/doors so we were glad we had a good supply of stall guards! Actually they had wooden doors but they were piled in a dark corner on the other side of the indoor and we didn't find them until it was time to leave. By the time we were unloading it was pouring rain and we had to drag our gear a really long way. There is room on the road to park after you drop the trailer but it would be difficult to unload closer with the trailer still attached. So it was a bit of a slog but totally worth it!

That night everyone set out to walk their XC courses. We had three people going three levels. The XC start is about a mile from stabling. Not kidding. All of them got lost. It was dark and raining. We wished we had gotten there earlier in the day so that would be my advice. Be sure to arrive by noon so you have time to set up and find your XC course. They have a crazy amount of space and so many beautiful trails. The footing is phenomenal everywhere. But it is extremely confusing out there!

The show ran over two days and we really loved the format with Dressage in the morning on Saturday followed by Cross Country and Show Jumping on Sunday Morning. 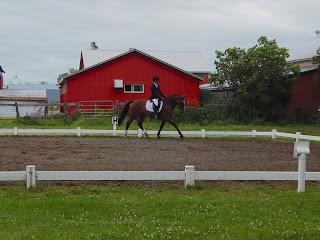 Dressage was pretty typical, grass warm-up, sand ring. The scoring was on an FEI scale which was
confusing at first but kind of cool to experience something new an different.

Cross country was a whole new adventure. It was BIG. It was LONG. And it had some crazy questions. Novice had a legitimate and intimidating full coffin where you needed to jump a roll top from the sun into the dark and go right down a steep hill, over a little brook, up a steep hill and then another roll top. 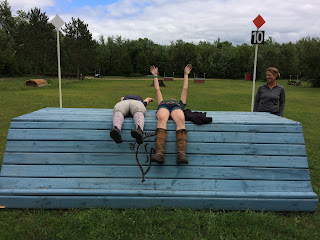 Training had two coffins back to back. This is a good place to go test your skills before a move up! Our poor Beginner Novice rider ran into a herd of cows on her course. Her horse took issue.

I did find a video on YouTube of someone running Novice (Pre-Training) there a few years ago which is worth watching. The footing was much better when we went. The year this video was made they had a ton of rain. The Novice gained a couple jumps by the time my daughter did it, including the coffin, but it gives you and idea of what's out there including an upside down canoe, an amazing water jump with banks, trakehners at most level and more. 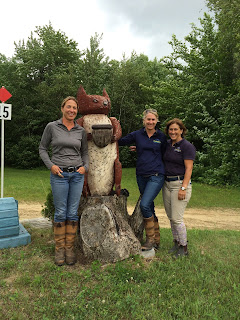 Probably the coolest thing about the place, and a bit off-putting for the horses at times, is the carvings.  The people who own this place are amazing. They are warm, hospitable and clearly passionate about horses and eventing. Yves Landry competed on the Canadian team. Watch this awesome YouTube interview with him. His wife is equally wonderful. Years ago Yves gave his wife a mini chain saw as a gift and voila! She populated the cross country course with her wonderful carvings. They make this place truly unique and really a beautiful work of art.

After walking some courses post cross country we all agreed this would be an amazing place to come visit for schooling. They have some permanent temporary stalls and welcome visitors. They have SO MANY JUMPS through all levels. I definitely saw some things out there that have to be advanced but they have a ton of stuff for Novice through Intermediate.

That night we went out to dinner in St. Jean Sur Richelieu. It was the most wonderful place!! Right on the Richelieu River, as the name would suggest. I can't remember the name of the restaurant but the food was amazing and there were tons of restaurants on the waterfront which all looked worth a visit. It isn't too far from the show venue so a great option with the more relaxed schedule of a two day show. 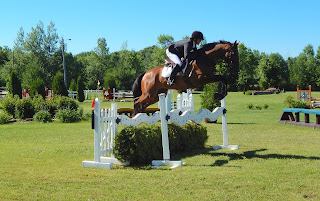 Sunday morning we had show jumping. They have a beautiful derby type field with built in hedges and banks and really nice jumps as well as a tent for viewing. Again, this phase pushed the levels. Everything was maxed out and there were more jumps than we see here in the US. But it was awesome! 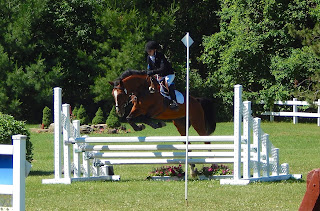 One thing I tell people when I talk about this show is that it is not a dressage show. So often these days, especially at the lower levels, it seems like eventing is only about the dressage. Well, in Naperville, dressage had little to do with it. There were very few clean rounds in either cross country or show jumping. One could certainly argue that it isn't very confidence building for the horse or the rider but from where I stood, it felt how I always thought eventing would feel. It felt intense, like you were going into battle. Area I is especially guilty of having cross country courses that don't challenge the lower levels and they're really inconsistent. This place threw everything at the rider. I wouldn't want to go there without being really well prepared but what an awesome place to ride if you are ready for it! I loved everything about it.

Perhaps my favorite part was after show jumping, as we packed up, we could see later rounds. As the day wore on, more and more cars arrived and the jumps got smaller and smaller. The cheering grew louder as the jumps grew smaller. By the time we left there was a good size crowd enjoying a gorgeous day, sitting outside cheering on little kids and their ponies going over tiny jumps. It was inspiring. I loved it. Everything about this place made us feel like we had stepped into another world, a fairy tale type place. Life is a little better knowing it's out there.

I was recently attempting to find some information for this year and found the website, which wasn't very helpful, has disappeared. They do have a Facebook page so if you want to contact them, that seems to be the best way!